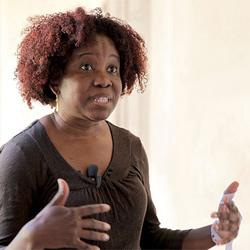 Fatimah Tuggar is a US-based Nigerian multidisciplinary artist. She uses technology as both a medium and a subject to serve as a metaphor for power dynamics in her work. Her photomontages have been widely exhibited at international venues in more than twenty countries on five continents including the 2003 Bamako Biennale in Mali; the Centre Georges Pompidou in Paris (2005); and the Museum of Modern Art in New York City. She is a member of the Arts Department faculty at the University of Memphis, Tennessee.

Fatimah Tuggar was born in Kaduna on August 15, 1967. She studied at the Blackheath School of Art (now part of the Conservatoire) in London between 1983 and 1985 and went on to receive a Bachelor’s Degree in Fine Arts from the Kansas City Art Institute, Missouri. She completed her Master’s in Fine Arts at Yale University in 1992 and conducted her postgraduate independent study at the Whitney Museum of American Art in New York City between 1995 and 1996.

Tuggar combines objects, images and sounds from various cultures, especially those that are similar to West Africa, to explore how media and technology diversely impact local and global realities and interact with one another. She does this not with the aim to criticise particular cultures but to focus on the importance and the desires that keep them functional.

Tuggar’s digital photomontages (computer montages and video collages) blend videos and photographs taken by her. She also draws material from commercials, magazines, and archival footage. The vibrant colours of the collages enhance the effect of her technically savvy works.

Women are a key part of her work, and her images depict them in various contexts and social roles beyond those traditionally attributed to them. Through her work, Tuggar aims to rethink labour, spaces, and African and Western relations, as well as present a feminist critique of development and biotechnology. One example of such a work is Working Woman (1997).

Another mesmerizing image is the anthropomorphic robot which appears in many of Tuggar’s works, a character named Robo. Robo references a character in the film Forbidden Planet called Robby the Robot, who was also a part of the watershed exhibition This is Tomorrow which held at the Whitechapel Gallery in London in 1956. Robo represents the forlorn hero of post-war industrial and consumer ideals, as well as the invisible foreign worker in the context of a contemporary Africa that combines traditional knowledge, modern conveniences and technology.

Tuggar has been the recipient of many accolades, including a Civitella Ranieri Fellowship in 2001. She has also received grants from institutions such as the Rema Mann Hort Mann Foundation.