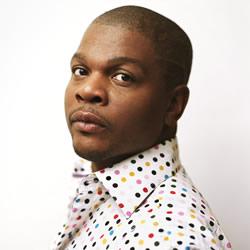 He was born in Los Angeles, California in 1977. His father is from Nigeria and his mother is African-American. As a child, his mother encouraged his interest in art by enrolling him in after-school art classes, and at the age of 12, he spent a short time at an art school in Russia. Because Wiley did not grow up with his father, at the age of 20 he travelled to Nigeria to explore his roots and meet him.

He received his Bachelor of Fine Arts degree in 1999 from the San Francisco Art Institute and graduated from Yale University School of Art two years later with a Master’s degree in Fine Arts.

Wiley's early portraits were based on photographs taken of young men on the streets of Harlem, as well as the South-Central Los Angeles neighbourhood in which he was born. Dressed in street clothes, his models assumed poses from the paintings of Renaissance masters, such as Titian and Giovanni Battista Tiepolo ‎. As his practice grew, his eye led him toward an international view, and he began to source models from cities such as Dakar, Senegal and Rio de Janeiro, Brazil, resulting a vast body of work called The World Stage.

Wiley models his works on the styles of a long line of portraitists, including Reynolds and Gainsborough. The Columbus Museum of Art, which hosted an exhibition of his work in 2007, describes his work as the one that has “gained recent acclaim for his heroic portraits which address the image and status of young African-American men in contemporary culture”.

Wiley’s paintings often blur the boundaries between traditional and contemporary modes of representation. They fuse a variety of styles, ranging from French Rococo ‎, Islamic architecture and West African textile design to urban hip hop. Wiley's slightly larger-than-life-size figures are depicted in a heroic manner, and their poses suggest power and spiritual awakening. He describes his approach as "interrogating the notion of the master painter, at once critical and complicit."

One of his works, Napoleon Leading the Army over the Alps (2005), is based on Napoleon Crossing the Alps (1800) by Jacques-Louis David. In Wiley’s version, an African rider wearing modern army fatigues and a bandanna takes the place of Napoleon.

Wiley has become one of the most sought-after painters in America. In 2002, Wiley received a Rema Hort Mann Foundation Grant and became Artist in Residence at the Studio Museum in Harlem, New York. His work was exhibited in the UK’s National Portrait Gallery as part of the Recognize exhibit in 2008 and won the Americans for the Arts Young Artist Award for Artistic Excellence in the same year. He received the Artist of the Year Award from the New York City Art Teachers Association/United Federation of Teachers in 2011, as well as Canteen Magazine's Artist of the Year Award in the same year. In 2012, he was honoured with the Pratt Legend Award.

Two of Wiley’s paintings were featured on the top of five hundred New York City taxi cabs in early 2011 as a collaboration with the Art Production Fund. He was featured in a commercial on the TV network USA as a 2010 Character Honoree. Puma commissioned him to paint four portraits of prominent African football players, and patterns from his paintings were incorporated into Puma athletic gear. The complete series, “Legends of Unity: World Cup 2010,” was exhibited in 2010 in cities around the world. Holland Cotter of The New York Times called Wiley "a history painter, one of the best we have... He creates history as much as he tells it." He currently resides in New York and Beijing.